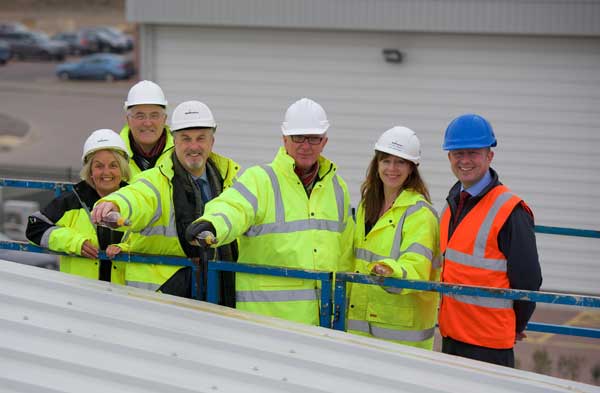 Development at Beacon Park reached a major milestone today as the final business units on Blackfriars Court, the park’s industrial campus, were topped-out with the help of a new occupier.

The ceremony, which marked the completion of the shell on the four small industrial units, was followed by a separate handover of a newly-completed medium sized office unit on the park’s Wellington Park office campus.

Beacon Park, in Gorleston-on-Sea, is part of the Great Yarmouth and Lowestoft (New Anglia) Enterprise Zone, which focuses on growing energy-related business within the East of England Energy Zone.

Great Yarmouth Borough Council, the owner and developer of the premier park, has been investing £8m to build more than 100,000sq ft of floorspace in four phases in a sign of confidence in the local economy.

Now the borough council is investing further funds, together with £3m of Government infrastructure funding, to develop seven more speculative units, as well as key infrastructure, in further phases.

Phase six – a terrace of four small industrial units totaling 12,800 sq ft – will be finished by June, completing Blackfriars Court. The units are already available to purchase or to let, with the first purchaser announced as Pentagon Freight Services.

Established in London in 1974, Pentagon Freight Services is the world`s largest privately-owned freight forwarder, with more than 1,000 personnel employed around the globe specialising in servicing the oilfield, energy and maritime sectors.

Today, Cllr Trevor Wainwright, the council leader, and Cllr Bernard Williamson, the cabinet member for transformation and regeneration, met at the building to conduct the topping-out ceremony, along with Phil Crane, of Pentagon Freight Services, Paul Pitcher, of main contractor Wellington, and Eunice Edwards, of New Anglia LEP.

In a separate ceremony at Wellington Park, the Cabinet members officially received the keys from Mr Pitcher for phase five of the park’s development, a medium office unit of around 6,000 sq ft, which could bring up to 50 jobs to Beacon Park.

Cllr Wainwright said: “The completion of Blackfriars Court is a major milestone in the development of Beacon Park, which is growing rapidly, creating jobs and supporting the local economy thanks to continued private and public investment, including a significant contribution from the borough council.

“There is a steady stream of enquiries from potential occupiers for the new units, including from businesses in the energy sector supply chain, and I am delighted to welcome Pentagon Freight Services as the latest new occupier.

“The fact that so many businesses are relocating to, and expanding within, the borough indicates huge confidence in the local economy, the skills of the workforce, the port and business park facilities, and the Enterprise Zone.”

Phil Crane, of Pentagon Freight Services, said: “Pentagon have had a base in Great Yarmouth since 1978 and are making a £500,000-plus investment for the future, securing the positions of 12 current staff with the potential to expand as business increases.

“With the purchase of the new building on Beacon Park, we have been given the opportunity to design a layout to our own specification, close to other businesses in the energy sector supply chain who are moving to the Beacon Park development.”

Chris Starkie, managing director of New Anglia Local Enterprise Partnership, said: “Another excellent development for Beacon Park. As construction continues, buildings are being snapped up which only goes to show the strength of the Enterprise Zone and surrounding areas, as a thriving hub for energy and other key businesses.”

Paul Pitcher, managing director of Wellington, said: “We are proud to be playing such a big part in the development of Beacon Park and the completion of these units continues to prove the confidence that now exists in the New Anglia Enterprise Zone and the wider economy.”

We use cookies to ensure that we give you the best experience on our website, find out more.

For more information please get in touch...